A recent case report published on Frontiers Genetics highlights the usefulness of Face2Gene as a tool for the identification of Tatton–Brown–Rahman syndrome (TBRS) and Say–Barber–Biesecker– Young–Simpson variant of Ohdo syndrome (SBBYSS), two extremely rare genetic disorders with less than 100 reported cases.

Written by Park S, Kim J, Song T-Y and Jang D-H from the Department of Rehabilitation Medicine, Incheon St. Mary’s Hospital, College of Medicine, The Catholic University of Korea, Seoul, South Korea, the case report discussion reads that “the present study, we described the power of the DeepGestalt program to analyze facial dysmorphic features in patients with extremely rare genetic diseases. The diagnosis of rare diseases is one of the most challenging areas of clinical genetics. Prior to this study, we believed that the DeepGestalt program would only be successful in the identification of common genetic conditions; however, it has also succeeded in identifying patients with rare genetic disorders.” 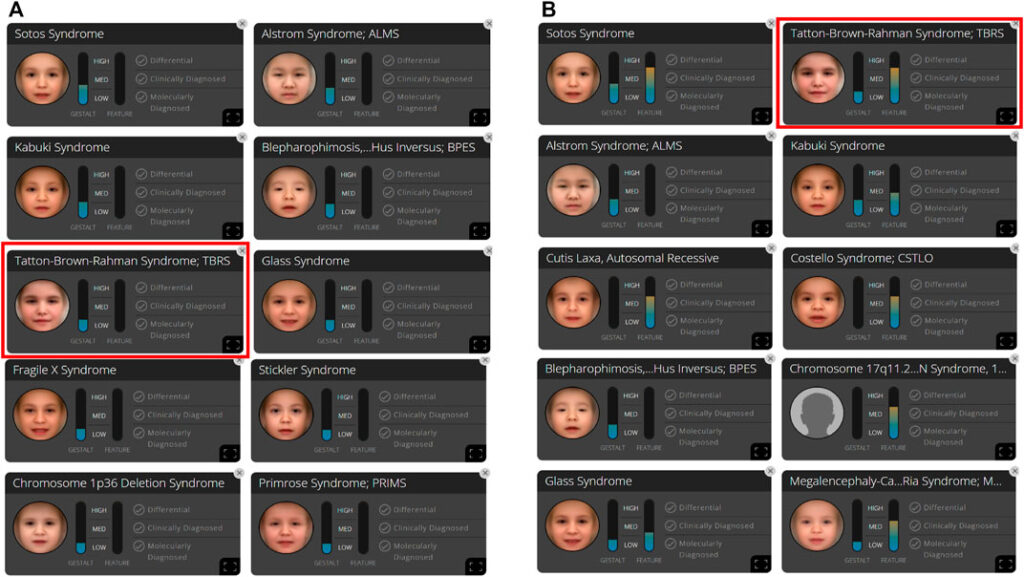 FIGURE 2. In patient A, 10 syndromes were automatically suggested by the Face2Gene platform as a tentative diagnosis based on (A) facial gestalt (frontal image) alone and (B) facial gestalt combined with clinical symptoms (Park S, at al (2022).

The Case Report: The success of face analysis technology in extremely rare genetic diseases in Korea: Tatton–Brown–Rahman syndrome and Say–Barber –Biesecker–Young–Simpson variant of ohdo syndrome showed that Face2Gene suggested TBRS and SBBYSS within the top five candidate disorders. “Face2Gene is useful for the diagnosis of extremely rare diseases in Korean patients, suggesting the possibility of expanding its clinical applications”.

Interest in applying Face2Gene on your researches? Find out how!

In this case, Face2Gene helped Dr. Cyndy Curry by motivating targeted genetic testing for a family that had long gone Read more

In this case, Face2Gene helped Dr. Lynne Bird focus analysis on a single variant in a setting where the patient Read more

Using Face2Gene to Make Sense of a Medical Mystery

In this case, Face2Gene helped Dr. Li target analysis of a gene which otherwise would not have been analyzed, ultimately Read more

After a successful experience using Face2Gene in his telehealth clinic in Scottsbluff, Dr. Abdul-Rahman decided to start another clinic using Read more

In this case, Face2Gene helped Dr. Omar Abdul-Rahman get patients tested in a more rapid, targeted way, many times before Read more